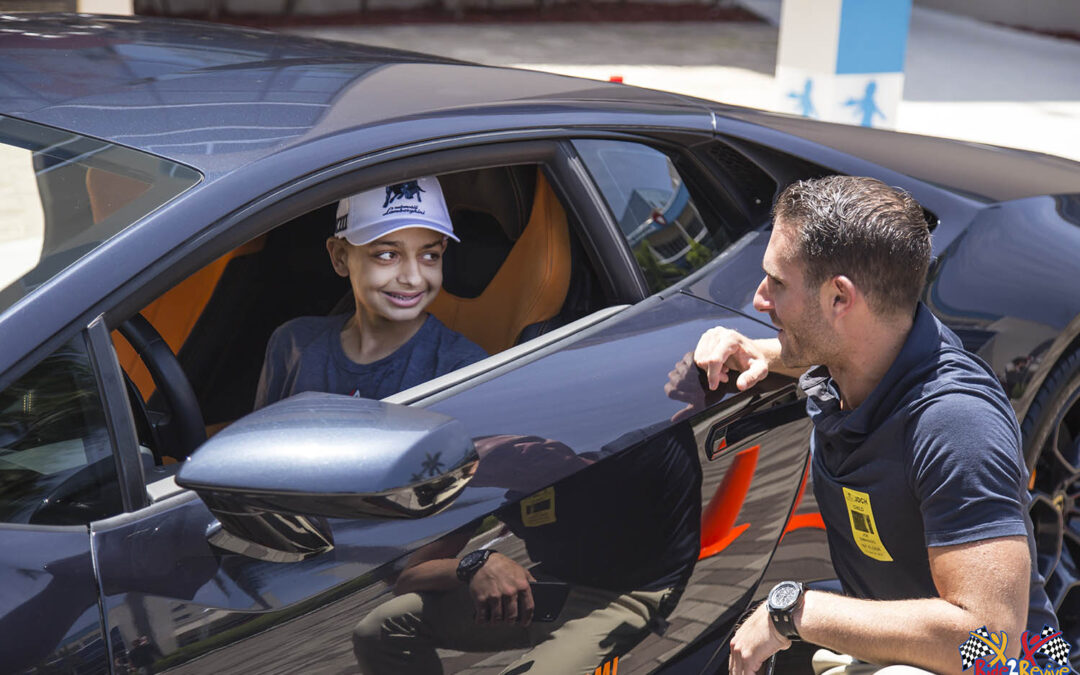 On Tuesday’s we run a support group for our adolescent oncology patients on the floor and Angelo shared that for his “Make a Wish” he is hoping to go the Lamborghini factory in Italy and how passionate he was about Lamborghini’s although he had never been in one. Our ChildLife team then contacted Ride2Revive and less than 48 hours later they came to the hospital in order to surprise Angelo. While Angelo has been doing well with his treatment both physically and psychologically, we have never seen a smile so big and for so long on Angelo. He was so elated, excited and although he had a lot of mouth soars that day, they did not keep him from showing his emotions and his smile was infectious. Not only was he smiling and so happy but so was his mom and grandfather and several of the staff that have been working with him.

Even several days and weeks after the “ride of his life” he lights up when he talks about that experience. Being the pediatric psychologist working with the oncology patients, I know firsthand how important their psychological well-being is during their treatment. Not only do experiences, such as the ones provided by Ride2Revive, lift the patient’s spirit in the moment and let them forget about their diagnosis and treatment for a little bit, it impacts them for weeks and months to come and often helps them during difficult times to draw on these special memories. Ride2Revive did not spare anything to make this an experience of a lifetime as well as a memory of a lifetime with dashboard cameras and professional videography. Angelo not only has his memory but a priceless video to help him relive this experience over and over again.

“Studies have shown that the psychosocial aspect is very important in the treatment of cancer and having the support from organizations such as Ride2Rive is truly priceless for our patients. “

Thank you very much and have a great weekend, 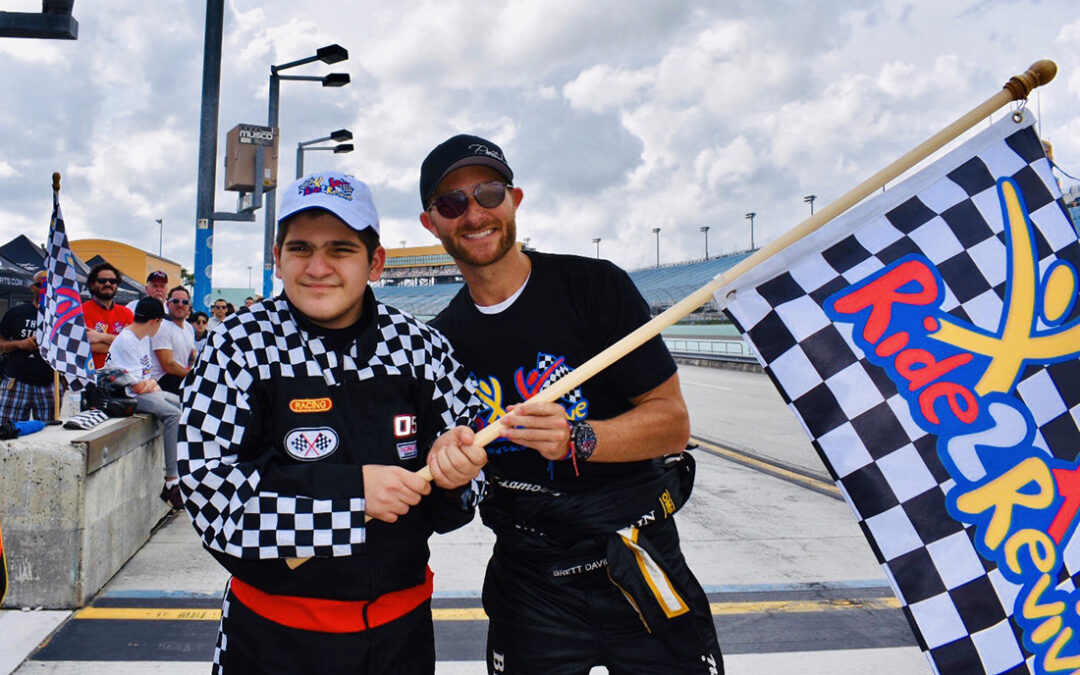 My son Ari who is 15 has been with Ride2Revive for 7 years! Ari has a rare chromosome disorder called Trisomy 9 Mosaic. It comes with a host of medical problems and special needs. He is a true miracle and a blessing! He has defied the odds with bravery, courage, humor and of course art! His love for coloring with markers (especially highlighters lol) has been a lifesaver and such a comfort for him during every hospital stay, procedure and doctor’s appointments. The reason I’m reaching out is simply just to thank you personally for joining the Ride2Revive team!

Your artwork plays a big part of Ari’s life. From New York to Florida I can’t even count how many Dr. offices have had your artwork displayed. It’s almost like playing a treasure hunt! Ari looks for the bold colors and fun shapes in every office he goes to. And when he finds it hanging on the wall it’s like an instant calming effect. This place must not be so bad if they have the cool pictures! Perhaps the most prominent artwork he sees is the big glove outside Joe DiMaggio Children’s Hospital. Every time we pull up, his eyes light up and he forgets for a minute where he is. The hospital is like our home, we are there pretty often and I can’t thank you enough for displaying your heart and art not just for Ari but all the kids who pull up nervous and scared for surgeries and procedures.

Yesterday though, brought a new level of happiness to Ari! Yesterday he got to associate your art with one of the days he looks forward to all year! Excitement and speed and his love for cars just makes him happy lol! And to be able to see your art in this setting was like a whole new ballgame for him! He recognized it right away and signed (he is non-verbal) same mommy, same like Joe D! For me as his mom to see him put together in his head all from the sparkle in his eyes that your art was there at one of his favorite places to be, filled him with so much life! He wanted to ride it and actually tried to open the door lol and the alarm went off lol he laughed and was proud even though we as parents put our hands over our eyes! Thank you for sharing your art with kids like Ari, and I hope this conveys to you how much it impacts him and is a part of his life. Today, in just an hour we will be pulling up to Joe DiMaggio for a two day stay to monitor his seizures! And I know as we pull up, he won’t be signing same mommy like Joe D, he will be signing – same mommy, like Ride2Revive!

Thank you, All the Best 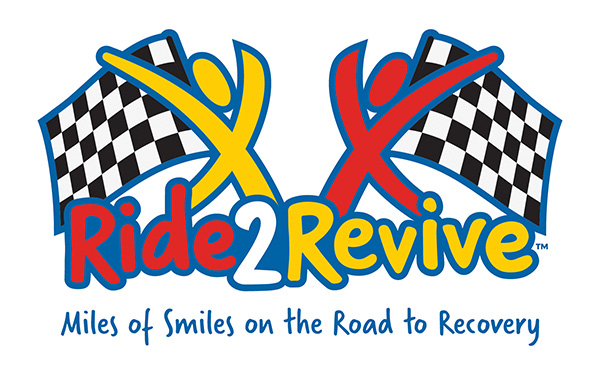 It had been almost 4 years since Brett & Brooke David’s father, Irv David, passed away suddenly from his fourth heart attack. By that time, Brett had proved the skeptics wrong and was successfully running the family business. After his father’s passing, Brett proudly placed his nameplate, on his desk, next to his father’s, as a constant reminder of the legacy he vowed to continue.

Brett and his father were very close and shared a love for cars and boats. He missed him dearly. It was no surprise when one afternoon, a father and his son, who appeared to be younger than Brett, came into the dealership, that Brett felt a connection to them. Although you could tell the young man was impressed with the cars, Brett immediately sensed a sadness in his eyes. As he walked around the showroom slowly touching each vehicle, the father began to tell Brett his story. His son had a rare form of cancer and they didn’t know how long he would survive. Without any hesitation, Brett turned to his son and asked him if he liked Lamborghini’s and would he like to go for a test drive.

His father waited patiently for them to return. As they pulled up and his son got out of the car, Brett noticed his father had tears in his eyes. The same young person that walked into the showroom earlier looking solemn and introverted, was smiling from ear to ear and talking to Brett, asking him every question about the car. The father hugged his son and told Brett he couldn’t remember the last time he saw his son smile.

It was at that moment, that Brett gained a new appreciation for the incredible business their father had left him and his sister. Growing up at the dealership, he sometimes took those amazing cars for granted that most people only get to see on TV and dream about. That day, to Brett’s surprise, it was not about how much power was under the hood, but about the healing powers these cars possessed.

Brett kept in touch with the young man, keeping up with his condition while always being aware of the difference between his monotone voice at the beginning of his conversations, to the upbeat tone after talking about these cars. He often thought about the first day they had met, of course prior to learning of his illness, and feeling guilty about his initial impression as he observed a father and son spending time together. But the more Brett thought about the positive reaction a car ride did for someone with a serious health condition, his heartache slowly turned, for the very first time, to a purpose. Brett shared the experience with his sister, and together came up with the idea of sharing their world of exotic automobiles with children battling life-threatening illnesses.

Ride2Revive was founded by Brett & Brooke David, in 2011. Once a child is diagnosed with cancer or any other childhood disease, every day is a new struggle. Ride2Revive’s mission is to provide Miles of Smiles on the Road to Recovery for children battling life-threatening illnesseswith memorable, adrenaline-filled driving experiences, meant to distract them from their health-related struggles and revitalize their senses. This unique, altruistic organization reflects the life-changing impact that fun, uplifting and positive experiences have on these patients, and therefore, their families.

About a year later, that young man’s father came into the dealership asking for Brett. I told him that I was his Mom and that Brett wasn’t in at the moment, but would he like to leave a message. He took a seat at my desk, took a deep breath as his eyes filled with tears and said, “Brett was very nice to my son. I brought him in one day and Brett took him for a ride in a Lamborghini and it made him so happy.” Before he finished his sentence, I knew exactly who he was talking about. My heart sank as he continued to speak of his son in the past tense. He said it had been months since he had passed away, but the idea came to mind that he could access his son’s cell phone just to hear his voice message. He came into Prestige that day to thank my son for the endless kind messages he left and the texts back and forth to his son. He knew that Brett’s kindness had an enormous positive effect on his son but was completely unaware of the friendship that had developed. In the end, as his father felt so helpless not being able to save his life, he said he would never forget that day, the smile on his son’s face and the lasting positive effect a ride in a Lamborghini provided.